I must admit- I’ve never really been into whoopie pies until last year when I made my first batch. I suddenly occurred to me that you know that trick everybody does where they take their cupcake and tear off the bottom and place it on top of the frosting to create a sandwich? well…it’s kind of like creating your own whoopie. Besides, whoopies are a whole lot cuter-especially when you make them mini size they are perfect party fair.

Come on, you know you want an excuse to call up your neighbor and ask “Do you want to come over for some whoopie?” Ha Ha Ha. Sorry, I had to slip that in there. But kidding aside, it’s fun to have the girls over to catch up on the neighborhood gossip (not kidding- kinda, sorta) while you scoot the boys outside to the deck  while they drink their beer so you can nibble on a few of these cuties drinking your seasonal drink of choice.

I made two mini sizes. I was playing around with the recipe during my recipe development phase; including even how to scoop them. At first I tried using the ice cream scoop method using a mini scoop, and they just did not come out uniform or smooth enough on top, (esp. since the batter is a bit sticky), so I switched to using the tried and true piping bag method. Not only was the piping bag method the winner but each and every cookie came out uniform in size (but full disclosure I used a template*See note below). I piped two different sizes (1.5 inch and 2 1/4 inch size). I know this is rather small, so you can obviously go bigger since we are talking really small here. I would not go bigger than 3 inch size though since they are a rich in flavor. I actually think the 2 1/4 inch size is perfect to be quite honest which is about 3 bites worth. 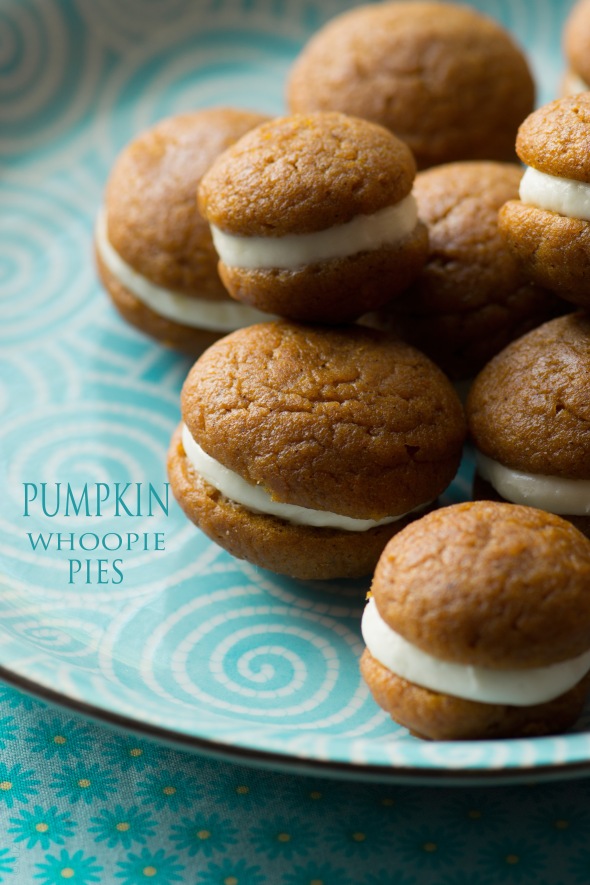 yield: 2-3 dozen depending on the # of size you make

In a large bowl place the pumpkin puree, vegetable oil, and egg and whisk to combine. Then add in the brown sugar and vanilla and whisk again to combine until smooth. Using a metal type strainer, hold it over the bowl and sift through the dry ingredients, then whisk until combined.  (Alternatively you can whisk the dry ingredients in a separate bowl and add to the wet). Regardless, mix gently until the mixture is comes together but do not over mix. Fit a piping bag with a large round tip (I like to use an 806). Prepare baking sheets with parchment paper. Preheat oven to 350° F with rack in center position. Pipe batter spaced about 1 1/2 inches apart. Bake one tray at a time 10-12 minutes until just set and when touched they spring back. Let cool on tray for a few minutes then remove to cool completely on wire rack. When cool sandwich with cream cheese frosting recipe. Note: for the 2 1/4 inch cookie size I felt that 1 tablespoon scoop frosting worked perfectly, and the smaller size, just use a little less.

* A long winded word about templates….I have a heavy paper type macaron template I use for my piping that I slide under the parchment paper and right before the cookies are ready to bake simply remove the template and reuse for the next tray when piping. I have various sizes that I’ve made over the years by copying circles with a sharpie around biscuit cutters. For a useful tip- Fold down the two opposite corners of your parchment sheets and then fold them back up so the corners are standing back up to use as a “Tab” so you can to grab the piping template a bit easier. If you don’t have the patience to make a template here are two recourses of two different sizes. For the 1.5 size the Southern Fatty blog has a template here. For a 2 1/4 inch size, here is a link for a 2 inch template here, and you can quickly trace with a 2 1/4 biscuit cutter using a pen to mark the outline so you have the right size and print out another sheet tape the two sides together so you can slide it under to fill a half sheet pan under your parchment. If this seems like a lot of work, you’re right, but you will be amazed that you will not waste any unmatched sized cookies when it comes to assembling your whoopies. Also, if you like to make macarons like I do- save your templates and you can use them over and over again multiple times. So, it’s up to you how OCD you want to be. Me, I’m a perfectionist when it comes to stuff like this, so hey, I can’t help myself.

In a stand mixer fitted with the paddle attachment, place the cold cubed butter and beat until pliable and the butter is sitting along the sides of the bowl. Scrape down the bowl, and beat a few more times on low. Add in the cold cream cheese and beat on low speed for a few minutes, stopping to scrape down, and in between  the beater to loosen the cream cheese so that it falls to the bottom of the work bowl. Continue to beat on low to medium speed for a few minutes until the two come together. Add in about half the confectioners sugar and stir speed slowly at first so that the sugar does not cause a mess, then increase speed and beat on slow to medium speed, increase speed in bursts, but do not beat at high speed-you want the mixture to remain cold so it does not turn runny. Add in the other half of the sugar and continue to stop and start and scrape down sides a needed and beat on low speed just it has come together. When it looks like it has come together, increase on high speed just for a few seconds to get rid of any lumps, but no longer than a few seconds. Cream cheese frosting is funny-if you beat it to death-it looses its structure and turns too runny. I have been making my cream cheese frosting this way rather than starting from room temperature and it always maintains it’s structure. It helps to have the cream cheese cut into small pieces when you start. You might have to practice a few times, so don’t be too disappointed if you don’t get it perfect the first time.  I hope you like this way!! I always start from cold now and it’s not failed me.

Who wants a whoopie?!  I could use anything about now that gives me a hint of a mental boost. I’m sure my readers on the East coast of the U.S. right now will agree. Hang in there- Spring is coming! How can you be mad when you say the word whoopie? My computer keeps trying to auto change it to whoopee every time-clearly hinting to me with a mind of it’s own that I need to whoop it up a bit more than usual. Note taken.

I’ve been wanting to make whoopie pies for a while now, but wanted to forgo the traditional marshmallow filling.  A couple of years ago I made this whopper buttercream for a filling in a buche de noel, and remembered how yummy it was. There are crushed whoppers in the buttercream which boosts the malt flavor even more. Who doesn’t love a good whopper?  I love the flavor combination of chocolate and malt, and now that I have a container of malted milk powder I’m going to have to bust out some more recipes I supposed with malt! These are fun for a party or casual gathering.  If you don’t know what a whopper is, you might know what a malteser is (if you hail from somewhere besides the U.S.) This recipe is adapted from a recipe called Devil Dogs from the Cookbook Baked Elements. Enjoy! 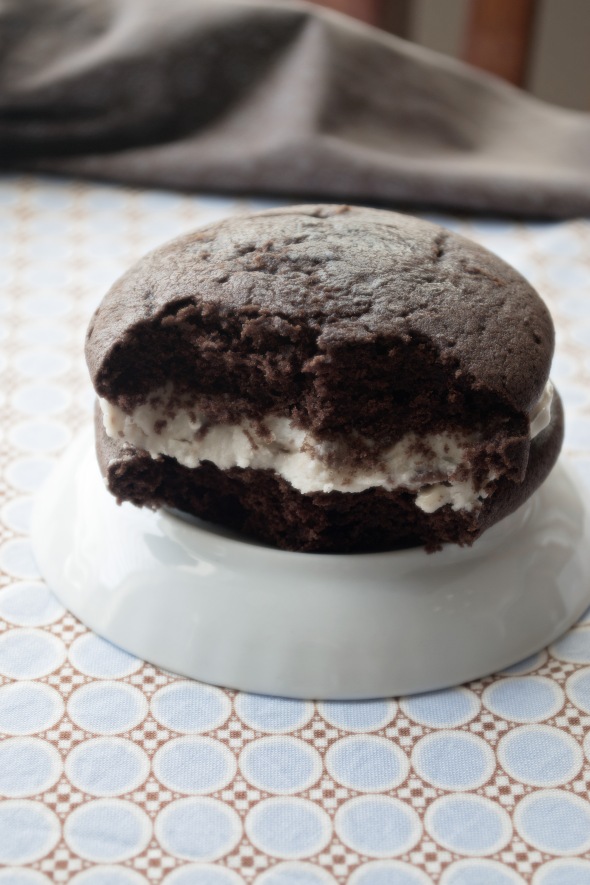 Keep the batter spaced well when scooping, as they spread when baked….

1 Cup whole milk +1 Tbsp. vinegar (Or you can use 1 Cup buttermilk)

Whisk the first 6 ingredients in a medium bowl and set aside.

In a glass measuring cup place the milk and vinegar and allow to sit for 10-15 minutes.

In the bowl of a stand mixer fitted with the paddle attachment, beat the butter and shortening until smooth and creamy, stopping to scrape down the bottom and sides of the bowl as necessary.

Add the brown sugar and vanilla and beat (about 3 mins.)  until fluffy-stop to scrape down sides and bottom of bowl as needed. Add the cooled chocolate and yolk and beat until combined. Note: I used the microwave to melt my chips and it took me exactly 60 seconds total heat time-which I stopped several times to stir the chocolate as to avoid burning).

Turn the mixer to low and add the flour mixture in 3 parts, alternating with the milk mixture, beginning and ending with the flour mixture. Stop the mixer often to scrape down the sides and bottom of work bowl. Remove the bowl from the mixer and use a spatula to mix gently one last time and gather the batter into the middle of the bowl. Place the bowl in the refrigerator to chill for 10 minutes.

Remove chilled batter from fridge. Using a 1 oz. scoop (2 Tbsp.), scoop and place batter onto prepared sheet pans, leaving 2 inches of space to allow for spreading while baking. Bake for 10 minutes or until cakes spring back slightly when gently pressed. Do not overbake. Allow to cool on pans completely, then carefully use a spatula to gently scrape underneath to remove. Note: the original recipe says to chill the cakes on pans for 10 minutes then remove, but I found that the cakes fell apart too easily with this, so I advise allowing the cakes to cool completely on the sheet pans then removing gently. Another helpful tip: I found that chilling the cakes (unassembled for about an hour before filling them also helps the cakes to firm up a bit which helps them stay firmer once assembling).

To Assemble: Scoop a generous amount of buttercream filling (recipe below) between two cakes and serve immediately. If not serving immediately, store assembled cakes in the fridge in an airtight container or in a container covered with foil.

2 Tbsp. boiling water (I do this in a coffee mug in the microwave)

Dissolve the malted milk powder in the boiling water and using a spoon, stir and  smoosh the powder as necessary against the side of the mug to ensure all of the powder dissolves.

In a medium saucepan over medium heat, stir together the cream, milk, and malted milk mixture. Whisk in the flour gradually and stir constantly until mixture reaches a boil and becomes thick, about 3 minutes. Set the mixture in the refrigerator to chill for about 10 minutes.

Cream the butter and confectioners sugar in a stand mixer fitted with the paddle attachment. Beat until fluffy. Remove the cooled malt mixture from the fridge and slowly pour in the mixture with the mixer on low. Once all the milk mixture is added, add in the vanilla and turn up the mixer and beat on medium speed until mixture is fluffy.

Place the Whoppers in a freezer type ziplock bag and using a heavy saucepot crush the candies until coarsely crushed.

Fold in the crushed whoppers into the buttercream.

Note: You can make the buttercream a day in advance if desired and store in an airtight container in the fridge. When ready to assemble whoopies- let the buttercream come to room temperature and rewhip by hand (vigorously) with a spoon to allow the buttercream to become fluffy again.

Note: you can crush additional Whoppers and roll the finished/assembled whoopies in crushed candies if desired.