This recipe is great on a cold Winter day. I’m probably a week or so late though since the polar vortex in the Midwest and Eastern United States has past. For my peeps in the Midwest; keep this in mind for the next time it gets really cold or you need an activity to keep the kiddos busy. The pretzels are really fun to make, so it’s great to get the kids involved to have a go at shaping the pretzels. Chances are you have all the ingredients already on hand. You will need granulated (active dry) yeast though. An added bonus if it’s really cold is these bake at a pretty high temperature so the house gets nice and toasty. You could also shape these into little 1 inch bits (dip size) and make them for the “Big Game” or a fun party snack served with different types of mustard. The recipe is from Alton Brown and I added an extra step by brushing the pretzels once they come out of the oven with butter; just like the ones you get in the mall. If you like a sweet version, dip the pretzels in cinnamon sugar on both sides. Another alternative is you could sprinkle on some pizza type seasoning, or sprinkle with chopped jalapeno/chopped green chili and shredded cheddar cheese. 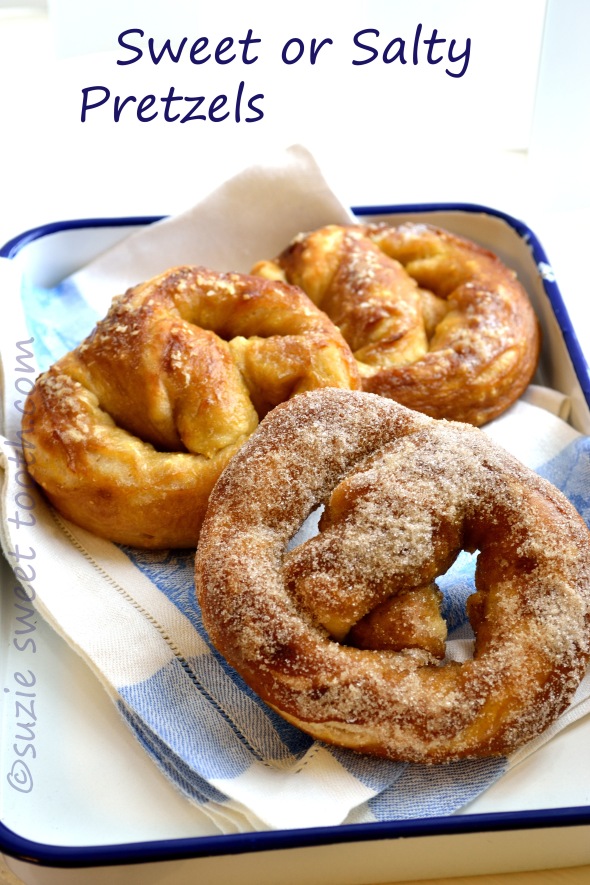 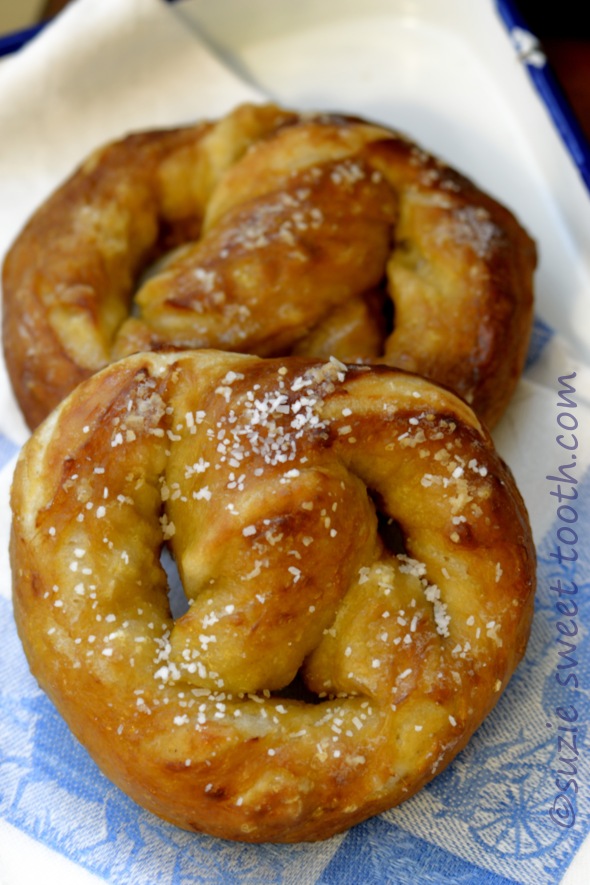 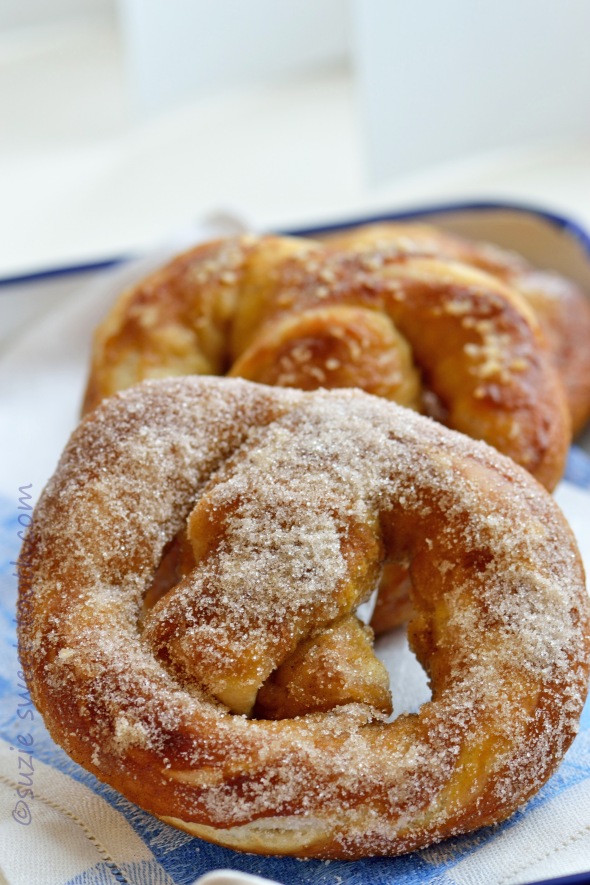 Shown: pretzels out of the soda bath and brushed with egg yolk mixture ready for the oven. Note: The pretzels puff up in the soda bath, (and in the oven), (next time I would make the rope a little longer than the recommended 24 ” so it is thinner-say 26 “) to define the shape a bit better

1. Combine the water, sugar and kosher salt in the bowl of a stand mixer and sprinkle the yeast on top. Allow to sit for 5 minutes or until the mixture begins to foam.

2. Add the flour and butter and, using the dough hook attachment, mix on low speed until well combined. Change to medium speed and knead until the dough is smooth and pulls away from the side of the bowl, approximately 4 to 5 minutes (the dough should make a slapping noise as it hits the side of the bowl and you know it is ready).

3. Remove the dough from the bowl, (it will be sticky and that’s normal). Place it in an oiled large bowl and turn dough over so both sides are oiled. Cover with an oiled piece of plastic wrap or wax paper (I like wax paper) and put in a warm place for approximately 50 to 55 minutes or until the dough has doubled in size.

4. Preheat the oven to 450 degrees F. Line 2 half-sheet pans with parchment paper and lightly brush with the vegetable oil. Set aside.

5. Bring the 10 cups of water and the baking soda to a rolling boil in an 8-quart saucepan or roasting pan.

In the meantime, turn the dough out onto a slightly oiled work surface and divide into 8 equal pieces. Roll out each piece of dough into a 24-26 inch rope. (The original recipe says 24 inches, but I think a bit longer would be better). Make a U-shape with the rope, holding the ends of the rope, cross them over each other and fold down the tails towards you to press onto the bottom of the U in order to form the shape of a pretzel. Place onto the parchment-lined half sheet pan.

6. Place the pretzels into the boiling water, 1 at a time, for 30 seconds. (I find it easy to place the pretzel onto a very large spatula; like a pancake turner size and then place into the water- the pretzel will release on it’s own). Remove from the water. Return to the half sheet pan, brush the top of each pretzel with the beaten egg yolk and water mixture and sprinkle with the pretzel salt (omit the salt for cinnamon sugar version). Bake until dark golden brown in color, approximately 12 to 14 minutes. Transfer to a cooling rack for at least 5 minutes before serving. Brush with softened butter while pretzels are still warm. (I find it handy to use the other half of a stick of butter; just peel off a bit of the paper and “brush” over the pretzel).

7. For cinnamon sugar version: omit the salt before baking and after resting for 5 minutes, brush pretzel with butter as above and dip both sides generously into a shallow bowl filled with the cinnamon sugar mixture.

Does everybody have sugar overload coming off of the holidays? Here is a savory recipe for you to break up the sweetness a little. We still like to have a little goodie with our meals but maybe we need to take a break from it. Or not. 😉

I’ve included a recipe for cinnamon-honey butter so if you need a wink of sweetness you can slather on the flavored butter. This butter is amazing on scones, biscuits or bagels so make sure to store the rest in the fridge.

Combine all the ingredients with a rubber spatula or hand mixer until thoroughly combined. Store extra butter in an air tight container in fridge. Leftover butter is great on bagels or scones!

I saw these beautiful concord grapes in the market the other day and I stopped dead in my tracks. I never see concord grapes.  I love the contrast in flavor of concord grapes. The skin is tart but the inside flesh  is super sweet.  I have been hanging onto the thought of making this grape and rosemary focaccia  for some time. The rosemary, no problem as I have an enormous rosemary plant growing in my backyard that is out of control. I should say it’s really a rosemary bush.  In a weird way I’m kind of proud of that rosemary plant as it started out as a tiny plant, and now it has aggressively taken over major real estate in my backyard. Everyone knows I cannot grow anything worth a darn, 😦  but the exception is my rosemary plant. Quite frankly I don’t even try; it has taken on a life-force of its own. With all the fog here I don’t even water it. That’s why I love it, it’s like the big green monster that self feeds. When you enter the garden it makes a statement. As soon as you get 3 feet from it you can smell the piney fresh scent. This bread is a lovely contrast between sweet and savory. If you can’t find concord grapes you could use black grapes also. 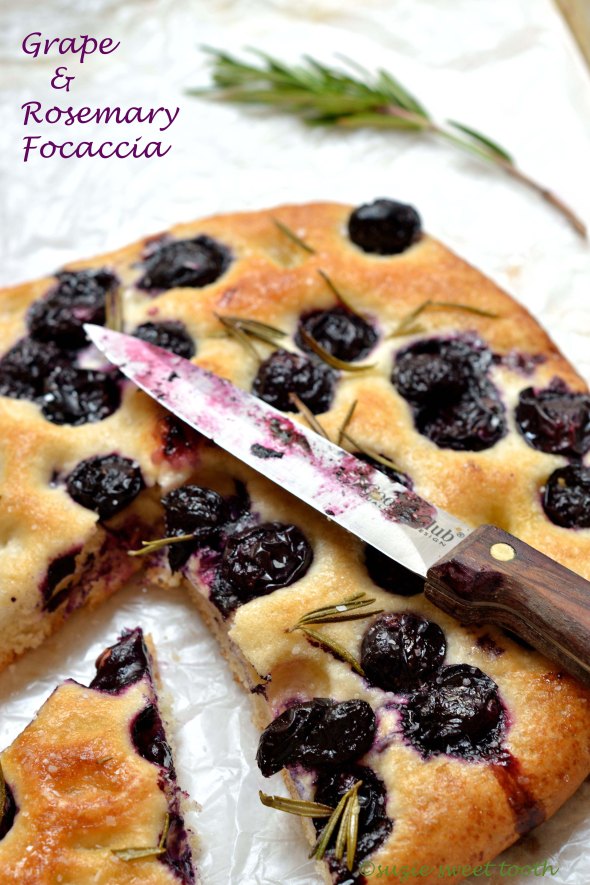 1. In the bowl of a stand mixer combine the water, yeast and 1 tsp. sugar and whisk to combine with a hand whisk. Let sit for 5 minutes. Add the rest of the sugar, salt, olive oil and bread flour and mix with a spatula by hand. Attach the dough hook and on medium high speed knead the dough for about 2 minutes. Oil a large bowl with extra virgin olive oil and turn out the dough into the bowl, turning the dough so it coats all sides with the oil. Cover lightly with plastic wrap and let rise for 20 minutes.

2. Spread olive oil over a large sheet pan. Take the dough and press it into a large rectangle about 1 inch thick. Conversely you can spread the dough into 2 round loaves; cover loosely with plastic wrap and let rise until doubled about one hour. Brush the dough with olive oil and dimple the dough using your fingertips. Scatter the grapes and rosemary leaves over the dough. Sprinkle with 1 Tbsp. granulated sugar.

3. Preheat the oven to 450 degrees F. Bake for about 15-20 minutes until golden brown. Let bread cool about 15 minutes then sprinkle with kosher salt. Serve warm.