Apples of all kinds are popping up in the stores. It is nice to see all of the different varieties of apples now a days. One of my favorite apples for pie is the pink lady. I think the secret to a good apple pie is using a combination of different apples. If I’m making a big pie I like to use up to 4 different types of apples. I must have made this apple galette like a million times. I somehow figured out several years ago that I like golden raisins and almonds in my pie; but play around with the recipe and make it your own. Omit the nuts if you don’t care for it. I like a bit of texture in my apple pie and the surprise of the thin crunch of sliced almonds gives it a nice contrast to the tender apple filling inside.

My parents were visiting one Fall and we were leaving for the airport in a couple of hours and I made this galette right before they left. It was a nice send off for the flight so their bellies were full and they were happy. The only problem was a few days later my Mom called and said “I’d give anything for a piece of that darn pie right now”. If you follow my recipe for pie crust you can double this filling and make 2 galettes and take one to a friend (or your Mom) or bring it a church potluck. 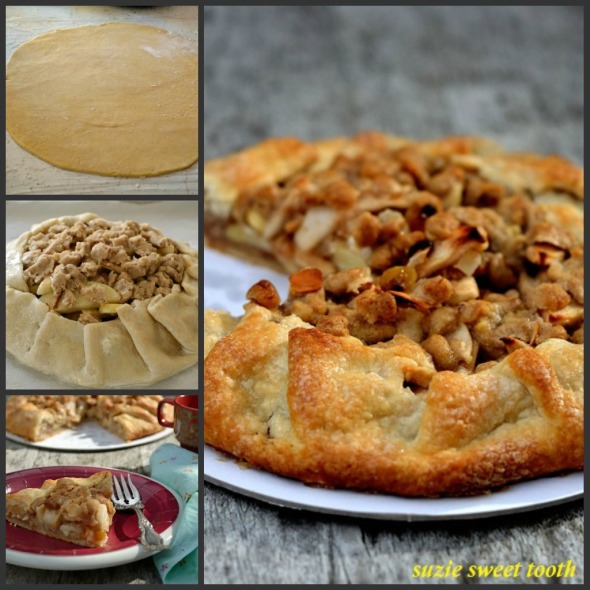 Apple Filling (enough for one galette)

1/3 Cup flour (if filling is too runny; add a couple more Tbsp. flour)

1/4 Cup walnuts, chopped (optional) (I know it’s kind of weird to have 2 kinds of nuts in this recipe; but I love it)

1/4 tsp. cinnamon (I swear by Saigon cinnamon-McCormick makes a nice one)

Half n Half (for brushing the crust once galette is assembled)

1. Roll out your pie crust to 12-14 inches and place on a parchment lined sheet pan; keep cold in the refrigerator until you are ready to assemble.

2. Peel all the apples and cut off the “cheeks” of the apples; leaving behind the core. Cut each apple cheek into 1/4 inch thick slices and toss in a large bowl with the lemon juice. Toss the apples with the rest of the ingredients: Sugar, flour, apple pie spice, salt, raisins, and nuts.

3. Make the streusel topping and set aside.

4. Remove your pie crust from the refrigerator and mound your apple filling in the center of the crust;leaving a border of about 2 inches for folding in the crust. Sprinkle the streusel over the filling.

5. Fold the edges of the crust around the filling to enclose. Brush with half n half and sprinkle with sugar.