This is no average ho hum pancakes and bacon. This is King for a day breakfast, only I’m sorry- your fantasy maid/cook? yeah, she’s off for the day and you still  have to cook it yourself. Hey, you can’t have everything.

This is bacon kicked up a notch.

Spicy, sweet candied bacon. Meaty, bordering on cannibalistic inner cave man- chewy bacon. The best part, there is no slaving over a skillet. Fire up your oven-that’s 375° Boss, and toss a wire rack over a rimmed baking sheet and let the oven do all the work.

Do yourself a favor though, make sure to buy the  EXTRA THICK CUT BACON

This is NOT the time to go cheap

Yes, you know you deserve it, you’ve been WANTING it

Yes, I know you look over 4.6 packages of bargain brand bacon before (deciding) on which one to buy.

Yes, I know you look at it from all 5 angles.

Cut it out, okay?! Today, just one day, you are King! For corn’s sake, it’s called Millionaire bacon, not cheap ass bacon. Did you read the title?

Okay…now that you are with the program: Start the bacon first and then you can knock out that pancake while those strips o’ love are resting. One more thing, fluffy nappy slippers and a good ol’ gnarly robe are required. Who ever said the King had to dress for breakfast? Breakfast tastes much better while still in jammies. It’s a fact, Jack.

Preheat the oven to 375 degrees F. Toss the bacon in a bowl with the brown sugar, making sure each piece is coated on both sides. Place the bacon on a wire rack set over a rimmed sheet pan and place in the oven for 20 minutes. Turn the bacon over after the first 10 minutes.  The bacon will still be somewhat soft after 20 minutes, but will crisp up once it cools. If you can’t find peppered bacon you can alternative crack fresh black pepper over the bacon once coated with the sugar. 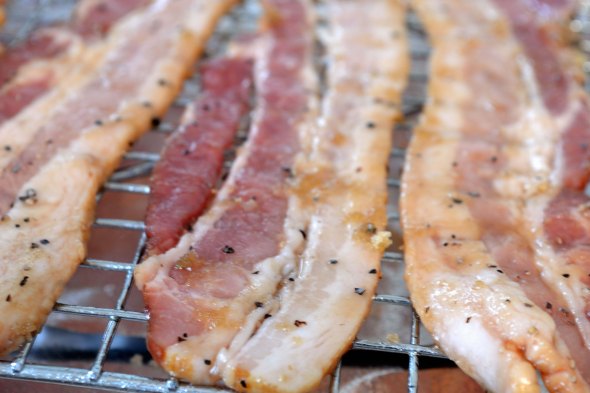 Bacon ready for the oven…. 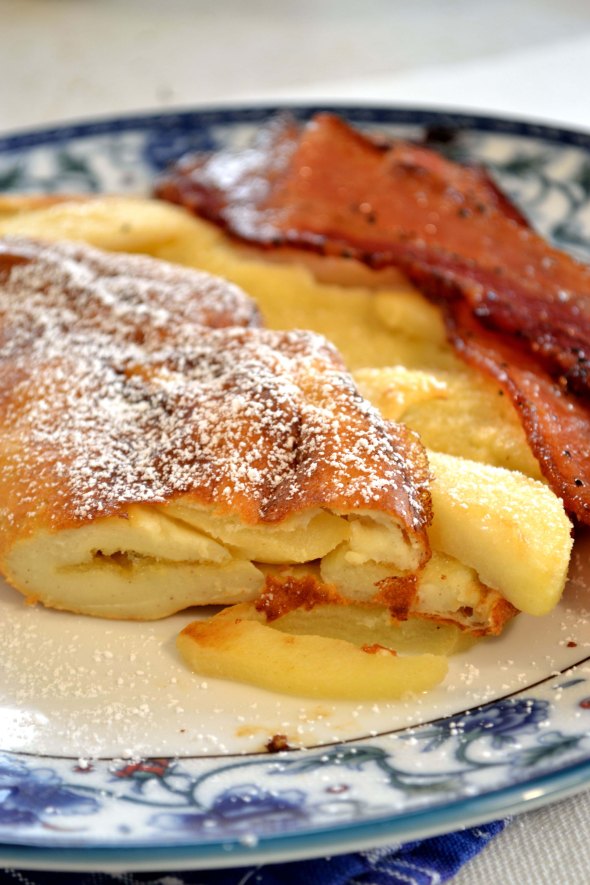 confectioners sugar (for dusting on top)

Preheat oven to 400 degrees. In a blender place the eggs, milk, vanilla, sugar, cinnamon, flour, salt and 2 Tbsp. melted butter. Mix until blended.  In a 9-10 inch non stick skillet melt the 2 Tbsp. of room temperature butter. Add the apples and stir with a spatula  for 5 minutes until apples have softened slightly. Pour the egg mixture into the skillet and immediately place the skillet in the oven. Bake for about 20 minutes or until the pancakes is puffed and golden. Sprinkle with powdered sugar and serve warm.

Mr. Oscar, standing guard in front of the oven while Millionaire bacon cooks….