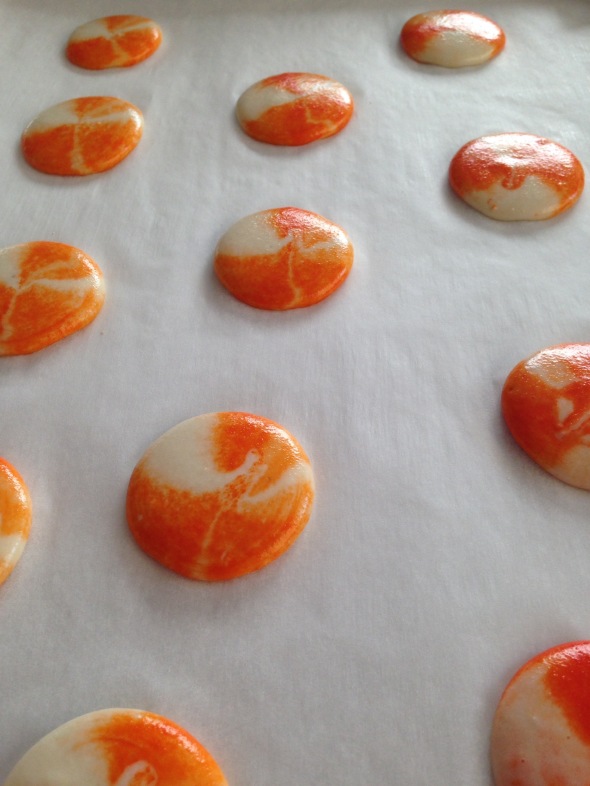 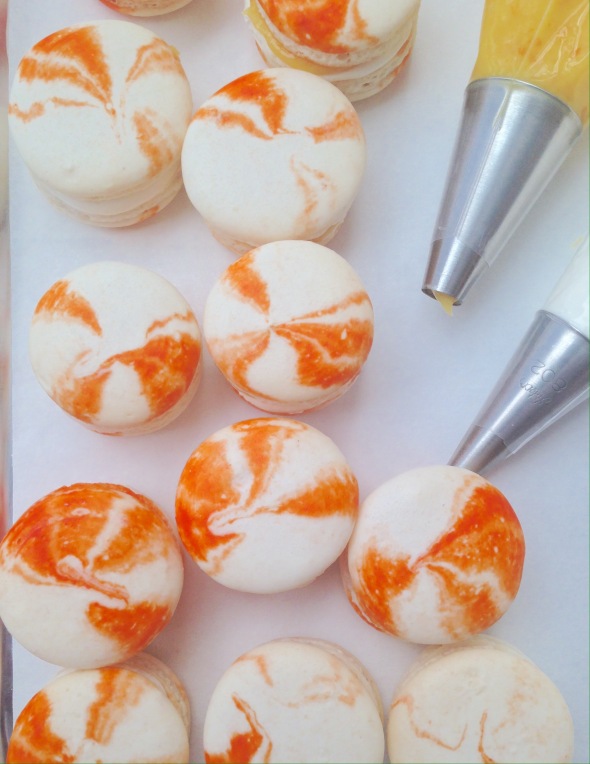 Does your childhood Summer evoke memories of you and your friends sitting on the porch eating a creamsicle popsicle? That sound of the dude with the push cart full of popsicles with the distinct unmistakable sound of bells clang al-ang- ing against each other. You could spot that sound 3 blocks away I swear. Just enough time for you to run in the house and yell, “Mom!!!!!!” “The ice cream man is coming, can I have a popsicle?” “Pleassssse?” The tang of the orange encapsulating that sweet vanilla flavor. There is nothing like it. It’s still one of my favorite flavors.

These macarons will transport you back to the 70’s (if you’re in your 50’s like me) when times were simpler. No WiFi, no reality Tv, no silly internet stories clouding your brain, just the nice weather forcing you to play outside. One bite will have you day dreaming of peaceful summers….

pinch of cream of tartar

* A note about superfine sugar- please do NOT buy it-it’s priced higher. Simply make up a batch by pulsing some in a food processor and store away in an airtight container.

1. In a food processor pulse the almond meal, and confectioners sugar, stopping to push contents down into the bowl and process until fine. Sift contents into a bowl and discard any hard lumps. Stir in the vanilla powder. In the bowl of a stand mixer place the egg whites, cream of tartar, egg white powder, and superfine granulated sugar, and hand whisk until foamy. Fit a stand mixer with the whisk attachment and mix on low speed (Kitchen aide stop 4) for 2 minutes, then medium speed (stop 6) for 2 minutes, then on high speed (stop 8) for 2 minutes, then increase to highest speed (stop 10) for one minute, or until whites are stiff. Hint: if you remove the bowl and turn it upside down and the whites do not slide out they are ready! (Just be careful when checking!)

2. Gradually add the almond flour mixture to the meringue and mix/fold with a rubber spatula until mixture when lifted is able to form a figure 8 ribbon. About every 5th fold lift the spatula up and let the batter fall gently back into the bowl. Once you can form a figure 8 ribbon without the mixture breaking, the mixture is ready. Prepare the piping bag with a round tip and swipe three stripes of orange gel coloring inside the piping bag. Fill gently with the mac batter.

3. Prepare a sheet pan with either Silpat or parchment paper and preheat the oven to 300° F. Pipe the macarons onto the prepared sheet pan about a quarter size with 1 1/2 inches space between. Note; if after piping there are visible peaks then the batter is too thick and could cause problems such as cracking or not rising correctly. Squeeze out all the batter back into the bowl (with firm pressure) and refill the batter back into the piping bag and re pipe.  Usually the act of doing this will thin the batter enough (without having to mix more) to get a more ideal thickness. Once you have piped the batter take the sheet pan and rap it on the counter a few times (3-6)  to release any air bubbles. If you still see any visible air bubbles pop them gently with a bamboo skewer or toothpick. Allow the sheet pan to sit for 30-60 minute to form a “skin” so when touched the batter is no longer tacky feeling.

4. Bake the macs for about 13-15 minutes until when touching the top of a macaron, the top does not wiggle or slide but is firmly set. If they look like they are getting too browned then cover with tinfoil for the last few minutes. Remove from oven and allow to cool completely on a wire rack. Do not attempt to remove until they are completely cool. Once cooled fill as described below.

In the bowl of a stand mixer combine egg whites and sugar. Set over a saucepan of simmering water and whisk until mixture is hot and sugar is dissolved. Remove bowl and place on mixer and beat until stiff meringue forms and bottom of mixer bowl is cool to touch; about 5 minutes. Add softened butter one tablespoon at a time until all is incorporated. Add the vanilla,  then beat until smooth.

To assemble macarons- Pipe a ring of vanilla buttercream onto one half of the underside of a cookie, then pipe the orange curd inside the vanilla ring, cover with another half of mac cookie. (see photo)

Combine yolks, sugar, orange zest, orange juice, salt, and butter in a heavy-bottomed saucepan; whisk to combine. Cook over medium-high heat, stirring constantly with a wooden spoon or heatproof spatula (be sure to scrape the sides of the pan), until the mixture is thick, 8 to 10 minutes. Let mixture come to a boil and cook, continually scraping sides of pan, for 2 minutes. If desired, strain through a fine sieve into a medium bowl. Cover with plastic wrap, pressing it directly onto the surface of the curd to prevent a skin from forming. Refrigerate until chilled and very firm, about 2 hours.

Any leftovers will last in an airtight container for up to 3 weeks in the fridge. You may also freeze leftover curd.